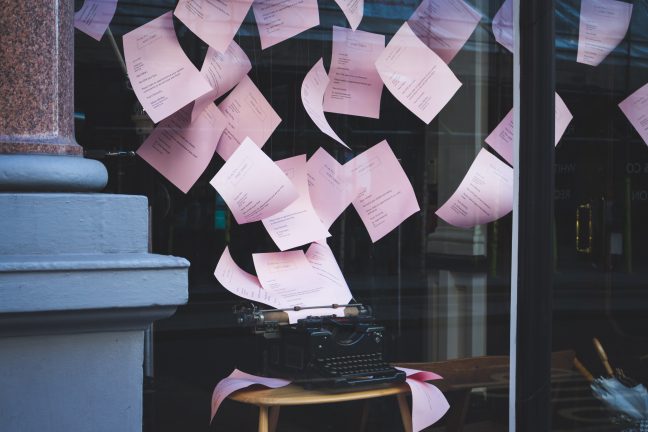 “Attention deficit” is a real misnomer.

Folks with ADHD don’t necessarily have a lack of attention so much as a difficulty controlling where their attention goes.

And yes, this can look like being easily distracted—squirrel!—but many ADHDers have the ability to “hyperfocus,” or stay focused on one thing or task for a really long time, especially for stuff we care about.

Our creative abilities, according to another study, may be related to our high energy, our impulsivity, and our tendency to seek out novelty.

It almost goes without saying, but enhanced creativity spells great things for our writing, especially in terms of developing stories, characters, and worlds that are truly unique.

One of the prominent aspects of ADHD creativity is the ability to generate lots (and lots!) of ideas.

As writers, this can include ideas for stories and characters, as well as potential solutions to problems we encounter along the way.

I see this over and over again with the ADHD writers I work with—there is never a shortage of ideas or possibilities. While some of us may still need to work on harnessing those ideas and following them through to the end, we’re not going to run out of new ideas anytime soon.

4. We are naturally curious

ADHDers are curious creatures. Because we seek out novelty, we love learning new things and exploring the possibilities around us.

And thanks to hyperfocus, this curiosity is unrelenting.

When we want to find something, we won’t stop until we find it. We’re persistent researchers, which is a useful skill for many types of writing—whether that’s establishing accuracy in nonfiction or historical fiction, creating a scientifically-valid sci-fi world, or finding just the right word for a line of poetry.

Our curiosity motivates us to ask more questions, dig into answers, and seek out the best solutions, possibilities, and ideas.

5. We notice things others miss

Folks with ADHD don’t filter sensory input as well as our neurotypical counterparts. But that can actually prove to be an advantage: we tend to notice things others don’t.

We can find patterns in the chaos. We can draw connections between things that at first seem completely unrelated. We can notice the tiniest details that, to the rest of the world, slip through the cracks.

Being highly observant is a great trait for a writer, working to capture some truth about the world and distill it into language.

6. We work well under pressure

Yeah, ADHD can often mean we leave things to the last minute, but many ADHDers thrive under the pressure of an impending deadline.

And when you think about it, it makes sense: feeling under pressure can release the same neurotransmitters (e.g. dopamine) supplied by stimulant medications like Adderall and Vyvanse, which are often prescribed for ADHD.

In this way, deadline pressure—and the other pressures that can come with being a writer—may actually fuel our focus.

7. We think outside the box

We aren’t afraid to go against the grain. While in the classroom this can be called “defiance” or “Cathy is eager to participate but doesn’t always follow directions,” in the writing world this is called innovation, artistry, inventiveness, and imagination.

Have you ever talked to a fellow ADHDer about their latest obsession?

Yeah, when we’re into something, we are all the way in. Sometimes to the annoyance of those around us, we couldn’t stop thinking about it (or talking about it) even if we wanted to!

As writers, we become deeply invested in our work. We not only get passionate about the stories, characters, and worlds we’re creating, but we also dedicate ourselves to improving our craft along the way. Being passionate about our writing is a major asset.

The ability to see what others filter out can also extend to emotions.

People with ADHD can be extra-sensitive to emotional cues—we’ll notice, for example, the tiniest signs of distress in our friends’ faces.

While this can also lead to us fixating on moments of perceived rejection in our personal lives, we can also harness that empathetic intuition for our writing.

When we channel our empathy, we can pour our hearts into the emotional content of our stories and the lives of our characters, creating worlds that our readers feel as deeply as we do.

Life with ADHD can be tough, but people with ADHD are incredibly resilient.

Once we set our minds to something, there’s nothing that can hold us back. We can pick ourselves up, dust ourselves off, and come up with a bunch of new ways (see reason #3) to move forward.

The writing life is full of rejection, and while that can still hurt, we won’t let it stop us. If someone tells us we can’t do something, folks with ADHD can become even more determined to prove them wrong!

As ADHDers, we’re used to people writing us off as lazy, unfocused, unsuccessful.

But the fact is, we can accomplish so many things—not just in spite of our ADHD, but because of it.

So if you’re reading this and you’re struggling, if you’re tired of hearing all the reasons you can’t, if the critics both inside your head and out in the world are so loud that you can’t help but doubt yourself—I’m here to tell you what I wish someone told me:

Your writing journey may not look like everyone else’s, but that doesn’t make it any less valid.

And it doesn’t make you any less of a writer—in fact, it may give you superpowers you didn’t even know you had.

And most importantly: you’re not alone.

Are you a writer with ADHD? I’m opening up a brand new Facebook group for ADHD fiction writers, and I’d love to continue this conversation there! This is a place to connect with like-minded writers, get feedback and support, and share the many unique quirks that come with writing while ADHD.