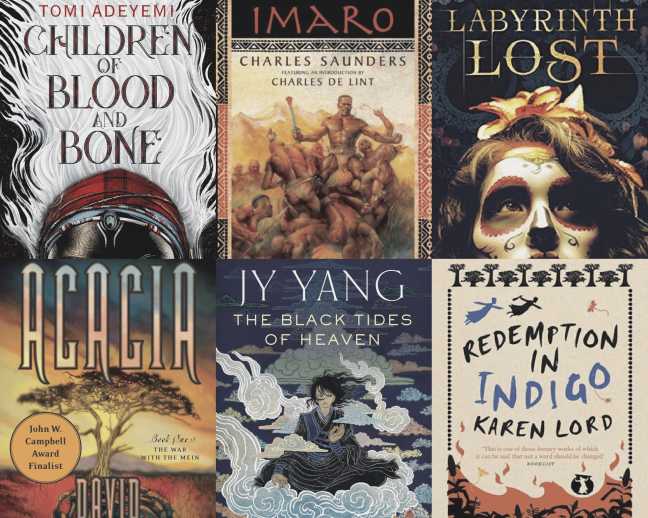 This post is part of our monthly series, “Decolonize Your Bookshelf!” Every month features a different genre, providing a curated recommended-reading list of fiction by BIPOC (Black, Indigenous, and People of Color).

Note: Some of the links in this post are affiliate links—that means we make a small commission when you purchase through them. It doesn’t cost you anything extra, and all affiliate income from this blog post will be donated to the Prison Book Program.

While fantasy-legend J.R.R Tolkien was wise to declare that wandering doesn’t necessarily mean we’re lost, it can sometimes feel so very good to get lost in a rich fantasy.

But when we get lost in a fantastical world, what does that world look like?

Most popularized fantasy worlds—like Middle-earth, Narnia, or Westeros—are reminiscent of Medieval Europe, drawing on a similar set of tropes, creatures, and images. While that can be a fun sandbox to play in, it’s far from the only possible container for magic, swordplay, and adventure.

In fact, fantasy authors of color have created deep and complex worlds influenced by a diverse range of histories, cultures, traditions, myths, legends, religions, and folklore. From epic fantasy, to sword and sorcery, to paranormal fantasy, and more—these worlds expand what’s possible in a genre already dedicated to exploring impossibilities.

Without further ado and in no particular order, here are ten spectacular fantasy novels by authors of color that bring us new and unique worlds to get lost in.

Read this if you liked: The Cruel Prince, by Holly Black; Scythe, by Neal Shusterman; Ninth House, by Leigh Bardugo

One of the most talked-about books of the decade, Adeyemi’s Children of Blood and Bone is an epic fantasy influenced by West African mythology and folklore.

The story is set in the fictional land of Orïsha, where magic used to thrive but is now considered dangerous. In this action-packed and racially-charged adventure, Zélie Adebola has one last chance to bring back magic and rise up against tyranny.

Does it live up to the hype? You’ll have to read to find out!

A Stranger in Olondria, by Sofia Samatar

Read this if you liked: The Fellowship of the Ring (Lord of the Rings #1) by J.R.R. Tolkien; The Raven Tower, by Ann Leckie; 20th Century Ghosts, by Joe Hill

Protagonist Jevick longs for Olondria, a land where books are plentiful. But when he embarks on his own Olondrian journey, he encounters the ghost of an illiterate girl and gets caught up in an epic power struggle that will change him forever.

Readers have compared A Stranger in Olondria to the there-and-back-again works of Tolkien, but instead of a Medieval Europe-inspired world, Olondria is derived from African, Middle Eastern, and South Asian influence. And like Tolkien, Samatar delivers in-depth descriptions and mythos that make this world as vivid as Middle-earth.

The Broken Crown (The Sun Sword #1) by Michelle West

Read this if you liked: A Game of Thrones (A Song of Ice and Fire #1) by George R.R. Martin; Daggerspell (Deverry #1) by Katharine Kerr; Wizard’s First Rule (Sword of Truth #1) by Terry Goodkind

The Broken Crown introduces readers to the conflict between (and within) the Dominion and the Empire. The narrative is driven by political intrigue: dangerous alliances, devastating betrayal, and everything in between.

Fans of epic fantasy, rejoice! West delivers the best parts of the genre while complicating its tropes. The plentiful female characters are allowed to be strong not only in the traditional, action-heroine sense of a “strong female character” brandishing a sword, but they also equip their strength through their words, gestures, and political moves.

Redemption in Indigo, by Karen Lord

Read this if you liked: Among Others, by Jo Walton; One Hundred Years of Solitude, by Gabriel Garcia Marquez; A Magical Inheritance (Ladies Occult Society #1) by Krista D. Ball

Redemption in Indigo presents Lord’s interpretation of a Senegalese folktale. When protagonist Paama leaves her gluttonous and greedy husband, the djombi (undying ones) give her the Chaos Stick—but one djombi is determined to keep the power of the Chaos Stick for himself.

Lord’s narration feels like an oral history being passed down, as though spoken aloud by a storyteller who occasionally breaks the fourth wall and addresses the reader directly. This short novel (under 200 pages) inspires insights on human experience and the nature of evil—with a dash of Chaos Theory.

The Grace of Kings, by Ken Liu

Read this if you liked: The King of Elfland’s Daughter, by Lord Dunsany; Tigana, by Guy Gavriel Kay; Gardens of the Moon (Malazan Book of the Fallen #1) by Steven Erikson

In this Locus Award-winning novel, Liu reimagines the fall of the Qin Empire and the rise of the Han Dynasty in an epic fantasy setting.

This sprawling epic leans more on politics than sorcery, while still employing mythology, science, and some magic. At its core, The Grace of Kings is a story of the turbulent relationship between Kuni Garu and Mata Zyndu—a relationship punctuated by momentous rises to power and dramatic falls from grace.

Read this if you liked: The Coming of Conan by Robert E. Howard; Swords and Deviltry (Fafhrd and the Gray Mouser #1) by Fritz Leiber; Elric of Melniboné (The Elric Saga #1) by Michael Moorcock

A sword and sorcery classic, Imaro is made up of six short stories originally published in Dark Fantasy during the 1970s. Throughout these stories, our hero Imaro roams the Africa-inspired Nyumbani, battling men and monsters alike.

Imaro is often compared to Conan the Barbarian, but though Conan can come across as two-dimensional, Imaro is a deeply fleshed-out character whose personal tragedies have a clear impact on his psyche. While Imaro is considered sword and sorcery, Saunders also coined his own term for this fantasy subgenre: “sword and soul.”

Read this if you liked: The Lightning Thief (Percy Jackson and the Olympians #1) by Rick Riordan; Alice’s Adventures in Wonderland, by Lewis Carroll; Sawkill Girls, by Claire Legrand

Young bruja Alex doesn’t want her magic—but when she wishes away her power, she unknowingly wishes away her family along with it. In Labyrinth Lost, Alex must team up with brujo Nova and descend “down the rabbit hole.” Together, they journey through Los Lagos, a Wonderland-like world where nothing is as it seems.

Córdova’s paranormal fantasy explores issues of trust and morality, family dynamics, and a bisexual love triangle in this unique, Latin-American take on the witch coming-of-age story.

Read this if you liked: The Shadow of the Torturer (The Book of the New Sun #1) by Gene Wolfe; Miranda in Milan, by Katharine Duckett; Silver in the Wood (The Greenhollow Duology #1) by Emily Tesh

Demane—demigod, healer, and the titular Sorcerer—is devoted to his Captain as the two travel through a dangerous land with their brotherhood caravan. The lyrical, intentional language of this novella is divisive; readers either love it or hate it. In some places the cadence is reminiscent of jazz or beatnik poetry, while in others it echoes of modern hip-hop—code-switching is baked into the narration.

While The Sorceror of the Wildeeps may look like a typical sword and sorcery on the surface, this genre-bending novella blends science and fantasy, while exploring masculinity, male sexuality, and cultural expectations placed on men.

The Black Tides of Heaven (Tensorate #1) by J.Y. Yang

Read this if you liked: Passing Strange, by Ellen Klages; The Lamb Will Slaughter the Lion (Danielle Cain #1) by Margaret Killjoy; Gideon the Ninth (The Locked Tomb #1) by Tamsyn Muir

Akeha and Mokoya are the twin children of the Protector, who rules the empire. As the twins’ magical powers develop, they become entangled in their mother’s political schemes, and Akeha falls in with a rebellion. Per their culture, both twins are referred to in the singular “they” until they choose a gender.

The Black Tides of Heaven is one of a pair: this novella focuses more on Akeha, and The Red Threads of Fortune focuses on Mokoya. Together these “twin books” introduce the Tensorate series—a world with a rich culture and a complex, spiritual system of magic.

Acacia: The War with the Mein (Acacia #1) by David Anthony Durham

Read this if you liked: A Shadow in Summer (Long Price Quartet #1) by Daniel Abraham; A Game of Thrones (A Song of Ice and Fire #1) by George R.R. Martin; The Eye of the World (The Wheel of Time #1) by Robert Jordan

Acacia follows the Akaran family, the ruling family of the Known World. Although King Leodan is a loving and doting father, he also keeps dark secrets from his children—including the harsh realities and price of their family’s prosperity.

Driven by well-developed characters, Acacia is vast in scope and low on magic. With twists and betrayal around every turn, Durham delivers a sprawling epic, rich in history, politics, and intrigue.

*Keep an eye out for LaValle on our Horror list, coming in October!

These authors all had books on the dystopian fiction list, but they’re so great I couldn’t not mention them again! If you loved these authors’ dystopian works, here are some that lean more fantasy:

Didn’t see your favorite on the list? Fear not! We have new lists coming out every month. Speculative fiction fans: you’ll want to check out our list of dystopian novels here, and there will be more for you in future lists of time-travel fiction, magical realism, space operas, paranormal fiction, and more—keep an eye out for your faves in our upcoming editions. If you’d like to offer further input, feel free to fill out our quick survey on this project.