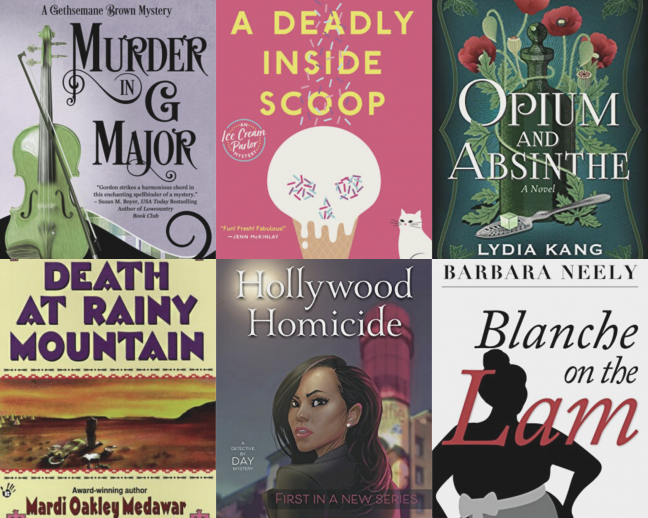 This post is part of our monthly series, “Decolonize Your Bookshelf!” Every month features a different genre, providing a curated recommended-reading list of fiction by BIPOC (Black, Indigenous, and People of Color).

Note: Some of the links in this post are affiliate links—that means we make a small commission when you purchase through them. It doesn’t cost you anything extra, and all affiliate income from this blog post will be donated to the Equal Justice Initiative.

Mystery novels make up one of the most popular fiction genres in the US, with surveys over the years finding that nearly half of readers pick up at least one mystery or crime thriller a year.

But that’s not the shocking part.

Even though mystery novels continue to be almost universally popular, the genre has historically been dominated by a narrow, white male perspective.

While diversity and representation remain issues across fiction, the obstacles faced by authors of color are particularly glaring in the crime genre.

If a publisher already signed one Black mystery author, for example, they may consider the box checked and won’t sign another. And if a manuscript doesn’t match their image of what a diverse read should be—i.e. not “Black enough,” “Asian enough,” or “Latinx enough”—it likely won’t check that box, either.

The lack of opportunity for mystery writers of color compels many of these authors to move on to other genres altogether, which means the mystery, crime, and thriller shelves continue to be predominantly white.

As readers, we have the power to change that.

In no particular order, here are 10 un-put-down-able murder mystery whodunnits by women of color. Every book on this list puts its own twist on the genre—but don’t worry, I won’t spoil anything!

The sleuth: Aspiring actress Dayna Anderson got her 15 minutes of fame from starring in a string of fast-food commercials, but after losing that gig, she’s strapped for cash and getting desperate.

The murder: Dayna witnesses a hit and run, and there’s a hefty cash reward for info on the killing. And that reward might just be enough to help her parents keep their house.

The twist: In Hollywood Homicide, what begins as a quest for $15k quickly turns into an obsessive and dangerous investigation into the victim’s life and the dark side of Tinseltown.

Blanche on the Lam (Blanche White #1) by Barbara Neely

The sleuth: Title character Blanche White is a middle-aged housekeeper with a full figure and a sharp wit. She’s comfortable in her own skin and only a little too stubborn for her own good.

The murder: After some trouble with an employer, Blanche becomes a maid for a wealthy family in their summer home [read: creepy mansion]—and the bodies begin to pile up. When Blanche becomes a prime suspect, she has to solve the crime to save her own skin.

The twist: Blanche on the Lam combines a page-turning whodunnit with insightful, intersectional observations of racism, classism, and sexism. But this high level of quality is something readers have come to expect from author Barbara Neely, who was named Mystery Writers of America’s 2020 Grand Master.

The sleuth: Bronwyn “Win” Crewse is determined to revitalize her family’s ice cream shop—which is a particular challenge when she’s forced to open during the first snowfall of the season.

The murder: In the snow outside her shop that night, Win finds the body of a grifter—who had a long-standing feud with her family—and her father quickly becomes a suspect. Talk about a cold open! (Sorry.)

The twist: A Deadly Inside Scoop is both a cozy mystery and a perfect summer beach read. It’s got two scoops of fun, drizzled with endearing family drama—and its quirky characters are the cherry on top. (Okay, I’m not that sorry.)

The Cutting Season, by Attica Locke

The sleuth: Caren Gray manages Belle Vie, a historic plantation-turned-tourist-attraction in Louisiana. She never asked to be a sleuth—she’s simply trying to provide for her daughter while the economy (and her personal life) crumble around her.

The murder: Caren stumbles on a body while walking the grounds and is pulled into an investigation that uncovers more than the murder in the present—it reveals uncomfortable secrets of Belle Vie’s storied past.

The twist: As the characters untangle mysteries both past and present, The Cutting Season delivers a subtle commentary on race and politics in this atmospheric novel by TV’s Empire writer Attica Locke.

The sleuth: Sophie Katz is a half-black, half-Jewish thriller author with a sarcastic, off-kilter view of the world (which makes for a fun and delightfully quick read).

The murder: Sophie’s filmmaker friend made a movie with a gruesome death scene—and is killed in the exact same way!

The twist: If Sophie doesn’t solve the mystery soon, she could be next, living out her final chapter—in more ways than one—in Sex, Murder and a Double Latte.

Opium and Absinthe, by Lydia Kang

The sleuth: In 1899 New York City, Tillie Pembroke is a bookworm with an “addiction to truth”—but it’s her growing dependence on laudanum that could spell her downfall.

The murder: When Tillie’s sister turns up dead, Tillie can’t help but compare the circumstances to Bram Stoker’s latest novel, Dracula: the two puncture wounds on her neck, the body drained of blood… It couldn’t be a vampire—could it?

The twist: Opium and Absinthe is a historical murder mystery with a distinctive gothic slant—an ideal read for history buffs, mystery fans, and vampire junkies alike.

Bury Me When I’m Dead (Charlie Mack Motown Mystery #1) by Cheryl A. Head

The sleuth: Private Investigator Charlene “Charlie” Mack has a lot on her plate: a mother with early onset Alzheimer’s, a struggle to come to terms with her own sexuality, an old lover she can’t quite leave behind, and a new lover she may not be ready for.

The murder: As a PI, Charlie is no stranger to murder, missing persons, and mystery. This should have been a routine case, but it swiftly turns personal as everyone’s secrets begin to come to light.

The twist: With a highly developed cast of characters, Bury Me When I’m Dead quickly becomes much more than a standard whodunnit. The murder might be fictional, but the complicated relationships and subsequent conflicted feelings are very real.

The sleuth: Gethsemane Brown is a classical musician and associate conductor hired to teach a boy’s school orchestra in the Irish countryside.

The murder: In her lodgings, Gethsemane finds an unexpected roommate: a ghost who begs her to find out who killed his wife and framed him for the murder.

The twist: Gethsemane is an unconventional amateur sleuth with an unconventional supernatural sidekick. Lefty Award Winner for Best Debut Novel, Murder in G Major blurs the line between cozy mystery and paranormal fiction.

The sleuth: Lana Lee reluctantly returns to work at her family’s restaurant after breaking up with both her job and her boyfriend. At 27, she hopes this will be a fresh start (and that her mother will stop trying to find her a husband).

The murder: Everyone knows about the restaurant property manager’s severe shellfish allergy, so when he winds up dead after a dumpling delivery (yes, the title is delightfully literal) the entire staff is under suspicion. And since Lana delivered the food, her defense isn’t looking good.

The twist: Not only does Death by Dumpling declare its own perfect food pairing, this cozy mystery also deals with cultural tensions of growing up in an Asian-American household with conflicting expectations.

The sleuth: In 1866, Tay-Bodal is a gifted healer of the Kiowa nation, but he’s never really fit in. His inferior skills as a hunter and warrior place him at the bottom of the social hierarchy—and his ideas around medicine and healing run counter to tradition.

The murder: When a candidate for the next chief is killed and warrior Cheyenne Robber accused, Tay-Bodal is given five days to solve the murder and resolve the intertribal conflict.

The twist: Death at Rainy Mountain combines Native American western and murder mystery, humor and historical accuracy, in a heartwarming story of a misfit finding his place in the world.

Didn’t see your favorite on the list? Fear not! We have new lists coming out every month. Mystery and crime novel fans: there will be more for you in future lists of detective novels, thrillers, and spy fiction—you’ll want to keep an eye out for your faves in our upcoming editions. If you’d like to offer further input, feel free to fill out our quick survey on this project.