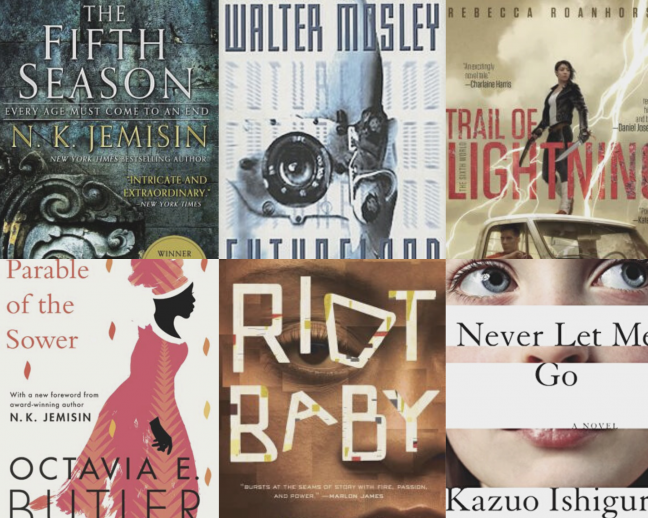 This is the first post in our monthly series, “Decolonize Your Bookshelf!” Every month features a different genre, providing a curated recommended-reading list of fiction by BIPOC (Black, Indigenous, and People of Color).

Note: Some of the links in this post are affiliate links—that means we make a small commission when you purchase through them. It doesn’t cost you anything extra, and all affiliate income from this blog post will be donated to the Equal Justice Initiative.

Systemic oppression is unbearable, and civilization as we know it seems to be coming to its end. We’ve gone through disaster after disaster—how much more can we take?

While I could easily be talking about 2020 (it’s been quite a year, hasn’t it?) I’m actually talking about one of my favorite genres of fiction: dystopian literature.

Dystopian literature is considered a sub-genre of speculative fiction, featuring a world in which things have gone (and are going) terribly wrong.

Sometimes the dystopia arises from a literal disaster, while in other works small incremental changes have accrued over time to create a problematic status quo. Either way, protagonists in these stories often question the systems of control (or chaos) at work in their world.

Dystopian stories allow us to grapple with some of the harsh truths of society and the human condition that can be difficult to address otherwise.

This is part of why so many dystopian novels are taught in schools: 1984, Brave New World, Fahrenheit 451, A Clockwork Orange, and more.

And yet, the gap here is obvious: where are the dystopian stories by authors of color?

The fact is, traditional Western literary canon tends to prioritize straight white male narratives over others.

Even when curriculum includes works by women, like The Handmaid’s Tale and The Giver, the dystopias taught in school tend to be overwhelmingly white, and some truly excellent novels by BIPOC (Black, Indigenous, and People of Color) are largely overlooked.

As a community of writers and readers, we have the power to change that.

After all, questioning the status quo is what dystopia is all about!

In no particular order, here are 10 must-read dystopian novels by BIPOC that explore post-apocalyptic worlds, oppressive regimes, and strong characters fighting for good.

Read this if you liked: The Starless Sea, by Erin Morgenstern; Skyward, by Brandon Sanderson; Circe, by Madeline Miller

N.K. Jemisin is one of the most talked-about sci-fi/fantasy authors on the scene, and it’s no wonder: Jemisin is the first author ever to win three Best Novel Hugos in a row. All three novels in her Broken Earth trilogy captured this prestigious award, and The Fifth Season kicks off the series.

The story takes place in the Stillness, a landscape blasted by regular periods of apocalyptic natural disasters. Divided by a caste system, society in the Stillness is just as unstable, just as volatile.

Through multiple points of view, this dystopian novel blends aspects of sci-fi and fantasy to explore the complexities of oppression, conflict, and destruction.

Trail of Lightning (The Sixth World #1) by Rebecca Roanhorse

After the world as we know it is destroyed, the Dinétah (Navajo) nation is reborn, with some people developing ancestral powers. Maggie is a Dinétah monster hunter who must not only face the monsters and gods of legend—she must also face her past.

Parable of the Sower, by Octavia E. Butler

Read this if you liked: The Lathe of Heaven, by Ursula K. Le Guin; Oryx and Crake (MaddAddam #1) by Margaret Atwood; 1984, by George Orwell

No sci-fi list would be complete without Octavia E. Butler, and this collection of dystopian literature is no different.

Set in the early 2020s, the imagined future of Parable of the Sower is not too far away. California is chaotic at best and dangerous at worst. Protagonist Lauren struggles with hyperempathy, which enables her to feel everything those around her experience—both pleasure and pain. Can she survive—and, more importantly, can she fulfill her dreams of a new society?

Read this if you liked: Station Eleven, by Emily St. John Mandel; Snow Crash, by Neal Stephenson; The Restaurant at the End of the Universe, by Douglas Adams

Ling Ma’s pandemic tale might hit a little too close to home in the midst of COVID-19, but if you can handle thinking about a different kind of contagion, Severance has a lot to offer.

Instead of coronavirus, the world is plagued by a contagious lethargy: people who contract the fungal infection are doomed to repeat their old routines ad infinitum. This dystopian satire delivers biting commentary on contemporary office culture and leaves readers asking: who are the real zombies, anyway?

Read this if you liked: Chronopolis, by J.G. Ballard; The Diamond Age, by Neal Stephenson; Black Mirror (Netflix series)

Okay, I’m cheating a little with this one. Technically speaking, this isn’t a novel—it’s 9 interconnected short stories—but leaving Futureland off this list would be a crime.

The stories are loosely tied together through shared characters and operate within the same world rules, much like the Netflix original Black Mirror. And like Black Mirror, the stories offer a chilling view of a future disturbingly within reach.

Brown Girl in the Ring, by Nalo Hopkinson

Read this if you liked: Panther in the Hive, by Olivia A. Cole; Machines in the Head, by Anna Kavan; The Future of Another Timeline, by Annalee Newitz

Before the novel begins, the privileged have already fled Toronto, now completely cut off from surrounding cities after a series of destructive riots. The city is plagued by violence and poverty, and new mother Ti-Jeanne must come to terms with her own abilities and connection to her family if she is to emerge victorious in this dangerous world.

The Shadow Speaker, by Nnedi Okorafor

Read this if you liked: Midwinterblood, by Marcus Sedgwick; The White Mountains, by John Christopher; The Lightning Thief (Percy Jackson and the Olympians #1) by Rick Riordan

Nnedi Okorafor’s The Shadow Speaker stands out from many other young adult novels, blending sci-fi and fantasy and featuring a Muslim main character. If you like coming-of-age stories that follow characters with mystical powers, you’ll probably want to add this to your TBR stack.

The story takes place in West Africa, in a world—or what little of that world is left—after a nuclear fallout. Fourteen-year-old Ejii embarks on a journey to find her father’s killer, learning more about herself and her mysterious “shadow speaker” powers in the process.

Read this if you liked: Upright Women Wanted, by Sarah Gailey; The Seep, by Chana Porter; Lincoln in the Bardo, by George Saunders

Riot Baby follows two siblings as they deal with systemic racism, police brutality, and mass incarceration—while they also develop superpowers. The story spans from the 1990s to the near future, exploring essential elements and emotions of the black American experience.

While it has been hailed by critics as an impactful dystopian narrative, Tochi Onyebuchi doesn’t view his book as dystopian, per se. “A lot of what is depicted in Riot Baby is what’s going on now,” Onyebuchi said in an interview on The Daily Show. “What’s dystopian for some is just reality for us.”

Read this if you liked: The Handmaid’s Tale, by Margaret Atwood; Brave New World by Aldous Huxley; The Bell Jar, by Sylvia Plath

Kazuo Ishiguro’s dark and literary dystopia is one of my all-time favorite books, and in my opinion, it’s a must-read for anyone who loves disturbing speculative world-building combined with unconventional storytelling.

In Never Let Me Go, narrator Kathy dives deep into understanding her unconventional adolescence and the world that made her who she is. She explores her relationships formed at Hailsham, an English boarding school, and grows to understand the secrets that were kept from them as students but that rule their everyday lives as adults.

Read this if you liked: The Road, by Cormac McCarthy; Against the Day, by Thomas Pynchon; The Fifth Head of Cerberus, by Gene Wolfe

While this work could find a home in any collection of sci-fi, the novel earns a spot on our dystopian list as it examines the aftereffects of a mysterious catastrophe that fractures, damages, and complicates the fictional midwest town of Bellona.

But “fractured,” “damaged,” and “complicated” could also be used to describe the composition of the book itself. Featuring an unreliable protagonist, the circular narrative is punctuated by inexplicable events and explores themes of mythology, perspective, and divergent experiences of reality.

Renowned cyberpunk author William Gibson, who wrote the forward to the current edition, considers Dhalgren a riddle that was never meant to be solved. It’s a divisive book—most either love it or hate it—but you’ll have to read it to decide for yourself.

These books share many elements: young people with otherworldly powers, characters grappling with systems of oppression, and questions of what it means to exist in a crumbling (or crumbled) society.

The beauty of this list, however, comes from the vastly different ways the authors use the tools of the dystopian genre.

We see conventional and unconventional narrative linearity, world-building drawn from folklore or technology or both, and characters with varying relationships to the destruction around them.

In other words, dystopia, like so many other forms of literature, is a way to explore truth.

Didn’t see your favorite on the list? Fear not! There will be new lists coming out every month—you’ll want to keep an eye out for your faves in our future editions. If you’d like to offer further input, feel free to fill out our quick survey on this project.